From Kings and Legends Wiki
Jump to: navigation, search 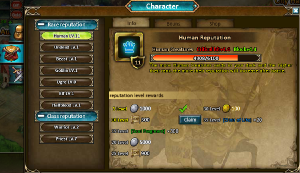 The reputation relevant information can be accessed by clicking the Reputation icon.

As you advance through the game, make sure to keep an eye on your Reputation. Each time you fight a battle, Reputation points are awarded to each Race and Class that was included in your deck. As the Reputation for each Race reaches certain levels, different rewards can be claimed. Moreover, each level increases the critical hit and block rate for the Race in question.

Whenever you successfully complete a battle, you will earn reputation according to the following rules:

​Reputation values of the various ranks of cards with 200% stamina bonus:

Each boss represents one of the 8 (counting dragons) main races you can earn Reputation for, and will provide a certain amount of Rep for that race for each completed stage regardless of whether you played any of its cards in that battle. (There is no boss so far that provides Outsiders or Angel rep.)

Reputation experience to next level

Using only rep tokens (bought at Tower Shop for 1 tower-coin each), to go directly from:

1383 tokens would theoretically take you all the way from level 1 to 50, but they can't be used until rep-level 30. The halfway mark for total rep experience to get to level 50 is just before reaching level 45.  At level 30 you are about 4% of the way to the end, and about 1/3 of the way there at level 42.

Each 5 levels of a race/class will allow one to claim a one-time bonus.

As race reputation levels get higher to multiples of 7, players will unlock cards in the shop and be able to exchange silver for those unlocked cards.

Card prices in the shop depend on their rarity: