From Kings and Legends Wiki
Jump to: navigation, search

Players can establish or join guilds here, in order to form teams on the battlefield.

Players over level 10 who do not belong to a guild can create a guild in the guild hall. The fee is 5000 Silver, and the creator of the guild becomes the guild leader. 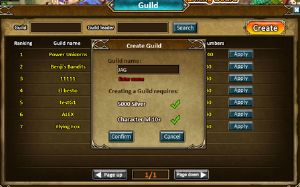 Players can apply to join an existing guild in the Guild Hall. Players can send applications to many guilds at the time, but can only be a member of one guild at a time. After a guild has accepted your application, you become a member.

Donating to a Guild

After players have joined a guild, they can use the 'donate' option to open the contribution interface. Donations can be made with silver or Gold, and each guild member's donation increases both the guild's wealth and players' gained experience.

Daily donations are split into 6 types, each type of donation can be made once daily as follows: 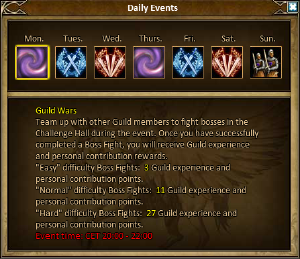 Team up with other Guild members to fight bosses in the Challenge Hall during the event. Once you have successfully completed a Boss Fight, you will receive Guild experience and personal contribution rewards.

Winning a 2v2 Arena Battle, with a Guild member will earn you Guild experience and X personal contribution points.

Winning a 4v4 Arena Battle, with a Guild member will earn you Guild experience and X personal contribution points.

Every week on Sunday, there will be an epic Tournament as the top Guilds face off in teams of 4. The winners will take home massive prizes for their Team and the entire Guild!

Unfortunately, sometimes people want to leave a Guild, or inactive members need to be kicked out of the Guild to open up spots for other members.
If a Guild member wishes to leave a Guild, they can just click 'Quit' in the left of the Guild Hall, however they will lose any remaining Contribution Points they haven't spent on Personal Research levels, and the Guild will lose all of the player's Contribution Points, whether spent or not!

Presidents of Guilds can kick inactive members from Guilds by selecting the Guild member and then choosing 'kick out of Guild'. To stop abuse where Guild leaders will lure members into donating before kicking them, there is a condition that the members CP will be lost from the Guild if the inactive member hasn't been inactive for 14 days before they are kicked.